Our Instructors have spent many years devoted to training in the martial arts and have attained a certain level of expertise to qualify them as teachers and also mentors.

Through extensive testing, certification and tournament level competition, our staff has attained mastery in this martial art and now enjoy sharing their skill and passing it on to their students.

Here are a few of WUXIA MARTIAL ARTS CENTER's instructors and other staff members, starting with : 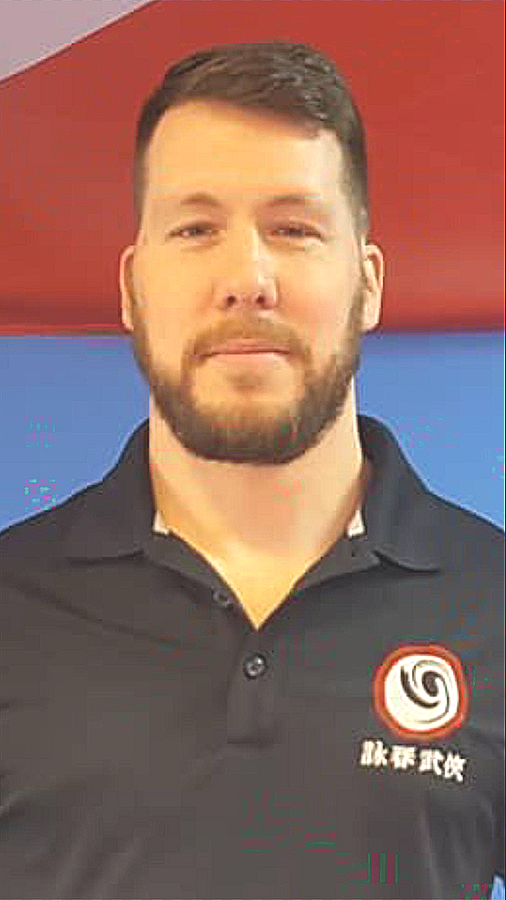 Sifu Scott Tarbell, a resident of Amesbury, MA came to the Worcester, Massachusetts area as a young boy from Fort Lauderdale, Florida. Scott has studied a variety of martial arts throughout his life. He began his Karate training at the age of 8 with the Boy's club as well as boxing under the supervision of his father.

Scott is a disciple of Master Shifu Yang Jwing-Ming and a certified Taijiquan and Shaolin Kung Fu teacher for YMAA International.

In 2003 Scott switched over to the Leung Ting Wing Tsun Kung Fu system, after many years of prior training in classical Wing Chun. Scott was the first person in Massachusetts to ever to receive the rank and title of Primary Technician (Black Belt) within Wing Tsun under Grandmaster Leung Ting and Sifu Jeff Webb. Scott was also the first person to become a Second Degree Instructor in Ving Tsun within the New England area under his Master, Sifu Jeff Webb the Founder and Chief Instructor of the National Ving Tsun Organization (NVTO). Scott Tarbell, a direct disciple of Dai Sifu Master Jeff Webb since 2003, was promoted to the rank of 3rd degree instructor and received the title of "Si-Fu," making him the highest-ranked and most qualified NVTO Ving Tsun instructor on the East coast as of June 2nd, 2012. As of 2016 Si-Fu Scott has achieved the rank of 4th degree instructor of Ving Tsun making him only one of three individuals to have received this honor in the NVTO!

In total, Scott has over 30 years of training in multiple martial arts, traditional and sport combat, and has devoted more than 20 years to teaching various martial arts. Scott continues to apply and teach a practical approach to sparring where he integrates his sport combat experience and traditional martial arts concepts.

A graduate of Salem State College, Scott holds a B.S. in Psychology with a double minor in sociology and human biology, along with a M.Ed in Special Education.

Scott spends his free time at studying Japanese Language, Culture, and History in Japan some summers, as well as researching fitness, martial arts philosophy and MMA fighting strategy. Scott is also very dedicated to his church, his daily training of fitness / qigong / meditation, as well as spending time with his wonderful wife and children.

Scott is a Special Education Teacher at Haverhill High School where he has taught for fifteen years while specializing in English Literature and US History.


Favorite Quote: "We all have inner demons to fight; we call these demons Fear, Hatred, and Anger. If defeated, then a life of single day is a triumph; if not, then a life of a hundred years is a tragedy."

Sifu Thomas Butzen  (Ving Tsun Instructor)
Thomas Butzen is a 3rd degree Ving Tsun instructor and has been studying Ving Tsun for many years. Thomas also studies Modern Arnis and Chin Na. Thomas is a friendly and technical Instructor for our Ving Tsun Kung Fu program who is always ready to share his experience and skills with others, Thomas can be found generously sharing the art from a technical perspective and with a smile.

Winston Wong  (Ving Tsun Assistant Instructor)
Winston is a polite and courteous Assistant Instructor for our Ving Tsun program. Winston has a wealth of knowledge and experience in Choy Li Fut, Shaolin, Ving Tsun, Modern Arnis, Taijiquan, Chin Na, Sanshou, and Submission Wrestling. Winston can be found helping others with a quick wit and a smile.

Paul Kerstein  (Ving Tsun Assistant Instructor)
Paul is a fun loving and humble Assistant Instructor for our Ving Tsun program. Paul loves to work with beginners to help build strong foundations for the art. Paul holds a Black Belt in Shaolin Kempo Karate and has extensive experience in Ving Tsun, Modern Arnis, Chin Na, Taijiquan, and BJJ/Submission Wrestling. Paul can be found analyzing techniques and sharing his knowledge methodically with a smile.

Dai-Sifu Jeff Webb, 6th Degree Ving Tsun Master, is the chief-instructor of the National Ving Tsun Organization and the Austin Ving Tsun Academies. He has studied martial arts for over 30 years and has taught professionally since 1996. During his career he has taught more than 100 seminars and weekend training camps throughout the United States and Canada.

He began studying So-Ryu style Karate in Austin, Texas at the age of 12. Two years later, he began training in Ving Tsun Kung Fu and has been studying it ever since. Master Webb is a former private student of Professor Leung Ting, the closed-door disciple of the late Grandmaster Yip Man.

In 1992 he joined the U.S. Air Force and was stationed at Ramstein AB, Germany. While serving there he taught and trained as an instructor in the European Wing Tsun Organization (EWTO) for three and a half years. Master Webb also trained directly with Grandmaster Keith R. Kernspecht, the founder of the EWTO, who is generally credited with spreading this style of kung fu throughout the continent of Europe.

Following his honorable discharge from the Air Force in late 1995, he promptly returned to the United States to begin teaching Ving Tsun professionally. The next year he opened his first commercial school in Austin, Texas, which has run successfully for more than 16 years. In late 2007 Master Webb, with the help of his instructor-level students across the country, founded the National Ving Tsun Organization (NVTO).

With a passion for teaching the public about the physical and mental benefits of Ving Tsun, Master Webb has inspired many to practice varying styles of martial arts. He has written a number of articles that have appeared in the Journal of Asian Martial Arts, Kung Fu Tai Chi magazine, Wing Chun Illustrated, and Austin FIT magazine. He has also appeared in television interviews on Austin's KEYE and KXAN stations and in local publications such as the Daily Texan and the Pflugerville Pflag.

Master Webb feels that as a teacher, his greatest pride comes from seeing his students achieve great things. He has a welcoming and non-threatening instruction style that has helped his students excel. To date, more than 55 of Master Webb's direct students have reached the rank of instructor and 8 of these advanced practitioners have also earned the title of “Sifu."

Personal student of Modern Arnis Grandmaster Remy Amador Presas the “Professor” from 1982 until he passed away on 8/28/01. There are less than a handful of people worldwide that started training with GM Presas in the early 1980’s and remain active to this day. Brian was awarded the title of "Master of Tapi Tapi" in October, 2000 and was granted worldwide ambassador status in Modern Arnis.
Personal student of Professor Lee Lowery (Kenpo Karate) for over 20 years starting in 1981.

Brian’s efforts and his system of TAWA were recently recognized as its own system by the elite World Head of Family Sokeship Council.

Master of Tapi Tapi – (“Tapi Tapi”- a phrase coined by GM Presas that means counter for counter) a title separate from and above rank, awarded by GM Presas only to those individuals having achieved the highest level of proficiency in Modern Arnis. There are only 7 people worldwide that have received this title from GM Remy Amador Presas.
In addition to his training under his primary Instructors, for over a quarter century, Brian has continuously expanded his studies by attending seminars taught by Grandmaster Wally Jay (Small Circle Jujitsu), Grandmaster Ed Parker (American Kenpo Karate), Senior Depasquale (Jujitsu), Sifu Richard Roy (Yang style Tai Chi, Qigong, Bagua Palm), Grandmaster Ron Van Browning (mixed martial arts), Chen style Taiji Master Zhang Zhaoxun as well as numerous world champions.
Brian continues to teach private lessons, local classes and seminars in central, CT, as well as continuing to travel and teach wherever the arts take him.

For the past 16 years, Brian has traveled, taught seminars, camps, conducted workshops, and given exhibitions throughout the United States, Puerto Rico, Canada, Germany, and Southeast Asia. He continues to uphold the wishes of the “Professor” by spreading the martial arts and serving as a worldwide ambassador of Modern Arnis and FMA. Brian has written numerous articles and assisted fellow martial artists in writing articles for numerous martial arts publications and books.


Rank, title, status, fame, fortune, and politics are of no concern to Brian. The chances of anyone seeing him actually wearing a belt are quite slim. For those that train with him, he prefers to be called “Brian.” Regardless of skill or longevity, if you are genuinely interested in learning the martial arts, then you will quickly realize that you have a lot in common with Brian as he shares his passion, experience and knowledge of the arts with you.


Brian often gives public praise and thanks for the opportunity to have been one of Professor Presas’ personal students for nearly 20 years. Another cornerstone in Brian’s training is his original instructor, Professor Lee Lowery (retired), who started training Brian at the young age of 13.
There are literally only a handful of people in the world that started their training under the Professor in the early eighties and remain active to this day. Brian is enjoying an incredible journey in the arts as he continues to travel, teach, learn, make “connections” and most importantly “give back” through the arts all over the world...

"Coach" Brian Wade Caldwell a 3rd degree BJJ Blackbelt is our technical consultant for Brazilian Jiu Jitsu and Submission Wrestling. Coach Brian teaches an Advanced private BJJ class for Blue Belts and above every Saturday to help refine details and keep us looking sharp. A former marine and Ohio State wrestler, Coach Brian was the first American to earn the rank of Black Belt under the renowned Brazilian Top Team. Brian has competed on numerous occasions and earned gold medals all across North America in Brazilian Jiu Jitsu and Wrestling.

Currently Brian has coached high school wrestling for more than ten years and produced many champions. Brian holds a 3rd degree Black Belt in BJJ and continues to train under renown BJJ Professors Daniel Gazoni, Anderson Silverio, and many top level BJJ guys across New England. Coach can always be found on the mats with a smile, extreme technical prowess, and a helping hand!

For more information about the WUXIA MARTIAL ARTS CENTER staff or training programs, please contact us at 978-340-1059 or by clicking here.